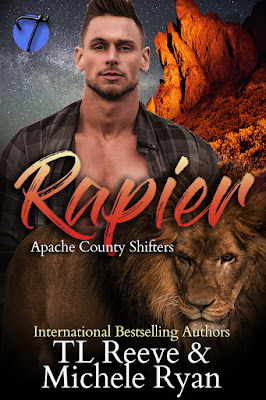 Ten years ago, Rapier Dryer sent his mate away. The plan was to meet up with her and find a new home. However, Raymond Quincy has other plans for them. What should have been months turned into years and now, he’s in a race against time to save Jasmine once more.


Jasmine Dryer knew the risks of splitting up with Rapier Dryer. At five months pregnant, both of them thought it was the best chance to save their baby. Ten years later, she’s willing to stand her ground with her mate and face off with the one man who could single-handedly destroy everything, Raymond Quincy.


Together they’ll forge an alliance with the Raferty Pack, determined to rebuild all they’ve already lost. There’s strength in numbers and Rapier and Jasmine are willing to use it to keep their family safe. However, when people start dying and Raymond escapes prison, the tenuous bonds between Rapier and Jasmine are tested.


This epic battle has been brewing for three years. Rapier is prepared to end it once and for all. Except, Bell and Zoe, Rapier’s twins, have been kidnapped and the man who has them, is out for Rapier’s blood as well.
By TL Reeve at April 12, 2019 No comments: